In Part 1 of this post I looked at Intelsat’s geo-stationary EPICNG satellite. In part 2, I’d like to talk about Medium Earth Orbit (MEO) High Throughput Satellites (HTS) satellites.

There are a lot of acronyms in that title but a general definition of HTS is that the satellite has more than a total of 100 Gbit/s of capacity, which is more than 100 times the capacity offered by a conventional older satellite. The increase is due to the use of frequencies higher than C-band i.e. Ka-band (26.5 – 40 GHz) and the use of multiple ‘spot beams’ which enables frequency re-use across multiple narrowly-focused spots of geography.

MEOs are not new as the first communications satellite, Telstar, which was launched in 1962, was a medium earth orbit satellite designed to facilitate high-speed telephone signals between the USA and Europe (I remember it well as was on a school trip to Venice at the time it was launched).

MEOs are a happy medium between geo-stationary satellites and require fewer satellites to cover the earth than needed in a LEO constellation. Because they are so near the earth they are not stationary. It takes exactly 6 hours for a MEO satellite to orbit the earth, when taking into account the rotation of the Earth. Two are visible at any location for 42 minutes.

The real benefit of MEO satellites are that they are suited to interactive data applications and real-time communications services because the round-time trip delay for a MEO satellite is only 150mS rather than 500mS for a geo-stationary satellite. This results in pretty much hesitation-free telephone calls, faster page loads and a much more responsive and frustration-free Internet.

HTS MEO satellites are closely associated with a company that is called O3B ( ‘Other 3 Billion’) which was founded in 2007 and was bought by Intelsat’s competitor, SES, on August 1st 2016.

Since early 2018 there have been 16 O3B MEO satellites active with the final four due for launch this year (2019) and offers high-speed connectivity of up to 1.6Gbit/ per transponder. The satellites follow an Equatorial path as can be seen in the picture below: 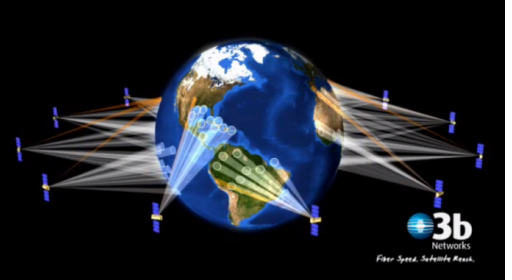 SES O3B have been delivering services to remote islands for several years in the Pacific and have pretty much cornered the market there in the five years. Islands such as Tonga, Nauru, Fiji,  American Samoa, Vanuatu, Cook Islands, Christmas islands, EastTimor, Kirbati, Norfolk Island, Palau, Solomon Islands, Galapagos and Papua New Guinea. 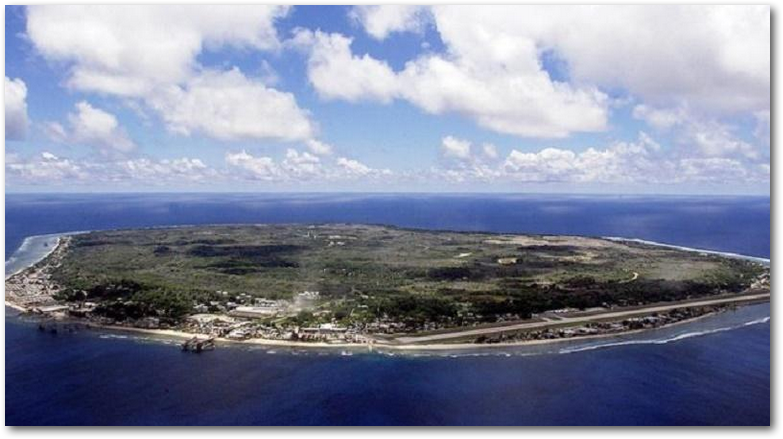 Nauru in the Pacific (Picture: O3B)

There are two well-known concerns with the first generation of O3B MEO satellites in relation to the Falkland Islands (which disappear with the second generation constellation).

Although 2.4M tracking dishes could be used, it would be more likely that a pair of 4.6M dishes would be needed for reliability and possibly with a radome covering to protect them. 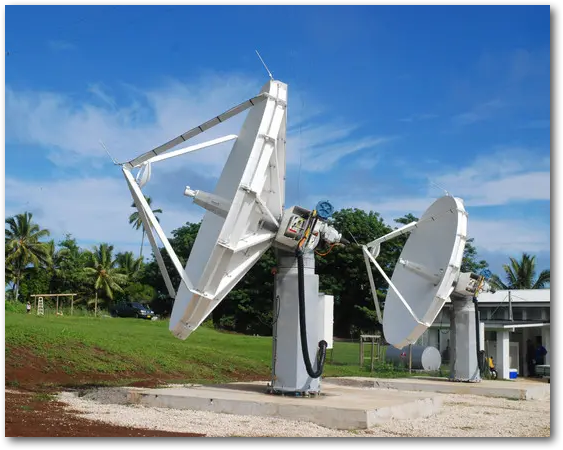 However, all is about to change with a vengeance for the Falkland Islands with the launch of the second generation of SES O3B MEO satellites – mPOWER.

In 2017, O3B  announced its second generation Ka-band MEO satellite network called mPOWER and will initially consist of five satellites manufactured by Boeing. The final number will be seven.

The SES O3b mPOWER  satellites are focussed on delivering broadband internet services and will “be able to deliver anywhere from hundreds of megabits to 10 gigabits to anywhere” through 5,000 steerable spot beams per satellite that can be steered remotely from the earth. Each satellite has a total capacity of 330Gbit/s and will have the ability to aim capacity at individual customers.

The single major change that will have a dramatic impact on O3B’s possible use in the Falkland Islands is that though the mPOWER satellites will be at the same orbital height as the first generation satellites, the mPOWER satellites will have an inclined plane orbit extending reach to +/- 50 degrees. This makes it makes it much more suitable for use in the Falkland Islands that the first generation. I also believe only 2.4M dishes could used for reasonable data throughput rates. Though, for high reliability by reducing path loss, 4.6M dishes might be preferable.

Each beam is able to support a data rate of around 1Gbit/s (1000Mbit/s) – more than enough to bring about a transformational change to the Falkland Islands broadband service.

The question is whether the Falkland Islands would need to purchase the whole capacity of the spot beam or not? If not, I’d imagine that there are plenty of cruize and fishing ships in the South Atlantic to take a share of the spot beam.

O3b SES mPOWER satellites are expected to launch in 2021 and should be able to deliver a backhaul service to the Falkland islands in 2022 onwards I understand.

It is most important to talk about another concept that would go hand-in-hand with Ka based MEO satellites usage – a combined C-band and Ka-band solution.

By way of an explanation SES O3B explain a real use of mixed Geo- and MEO satellites in the Pacific.

“Digicel [based in Jamaica] uses SES’s… C-band beams to deliver regional connectivity across the Pacific Islands, but also taps into O3b’s low-latency spot-beams to deliver fibre-like connectivity to more populous locations within Digicel’s networks. In Papua New Guinea, demand for O3b capacity originally rolled-out in July 2014 has quadrupled to almost 2Gbps – such is the appetite for broadband connectivity. Digicel’s increasing demand for capacity clearly demonstrates the benefits of a combined GEO and MEO solution.”

“In Timor-Leste, India-based Bharti is using both MEO and GEO to meet the increasing demand for better mobile networks. The low latency and massive throughput of the MEO satellite enables Bharti to roll out 2G mobile services and new 3G services, while GEO capacity is critical in ensuring seamless connectivity. Easter Island has also benefited from the rollout of O3b connectivity. Leveraging on both GEO and MEO capacity, Easter Island’s local population of 6,000 and average of 80,000 tourists per year have reliable and faster broadband access, and now enjoy 3G and 4G mobile services”.

Though it shouldn’t be forgotten that many of these Pacific islands have a greater populations than the Falkland Islands so it is much easier to build a business case. But this does not mean that it can be too easily ruled out for the Falkland Islands because it is ‘too expensive’.

Having both Geo- and MEO satellites would seem to me to be very important for several reasons: 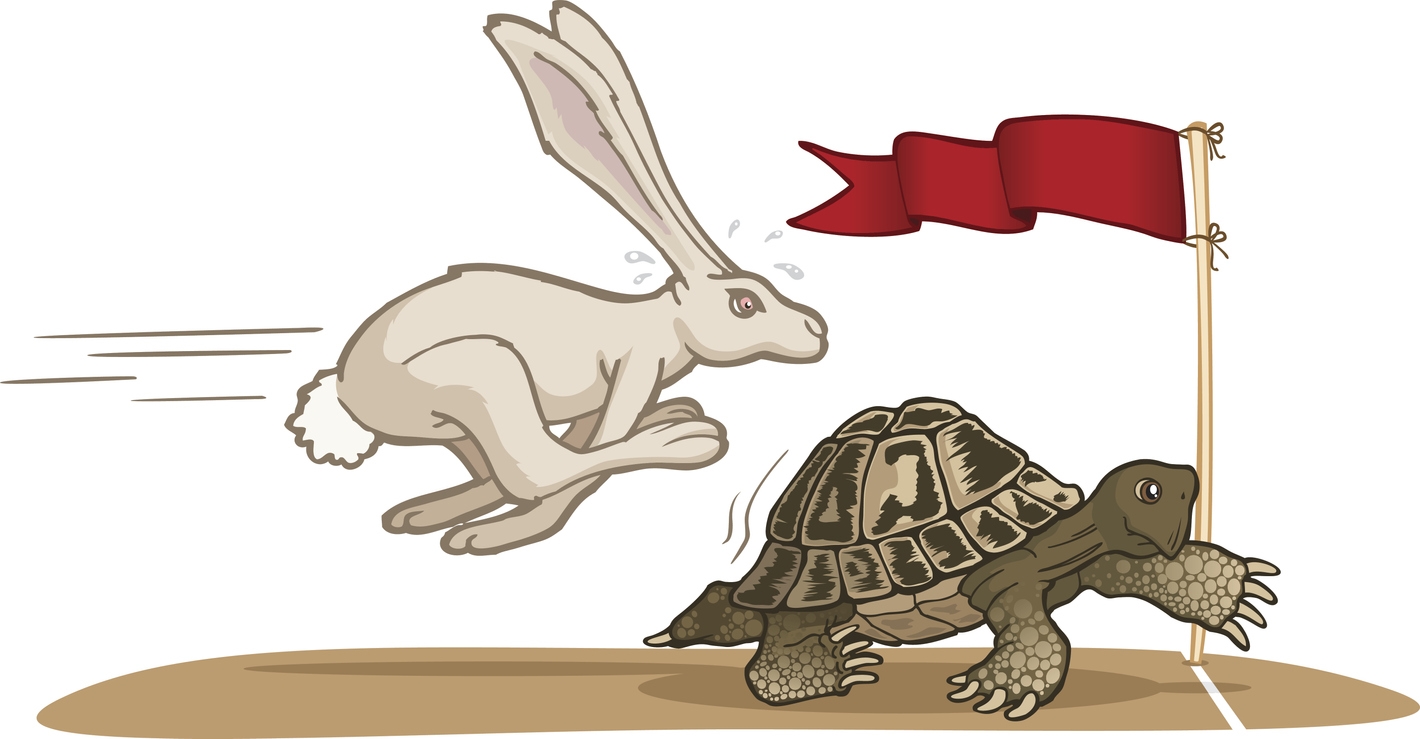 Back in 2014 even the Cartesian report: ‘FIG Strategic Telecoms Review’ recommended a hybrid solution:

“We have assessed a combined C-band + Ka-band scenario, due to their complementary characteristics, as well as continuing with a standalone C-band solution…

A marriage made in heaven? Maybe, but costs will be high for such a solution but they would be certainly justified in my opinion for beneits it brings to an improved boardband service and the added resiliance it brings to the Falkland Islands’ satellite link.

Rather than consider O3B’s first generation constellation for use in the near-term, it would seem to make more sense to wait until 2022/3 for the mPOWER satellites to be up and running with all the benefits they bring. It would be a major technical, operational and financial step to take for the Falkland Islands to add an MEO satellite like the SES O3B mPOWER to its satellite arsenal, though I’m sure that Sure are very familiar with the mPOWER plans as they are with the Intelsat EPICNG programme.

It would seem to me that the SES O3B mPOWER satellite network or constellation seems to be a perfect fit to fulfil an element of the Falkland Islands’ satellite needs. Looking at it from ‘on high’ – and 2022 is not that far away either.

Don’t let’s forget, because of the significant reduction in latency from 500mS to between 140ms / 180ms, interactive Internet applications such as Skype will zip along compared to that experienced when using the laggy geo-stationary satellite.

In Part 3, I will look at LEO megaconstellations.