I was pleased to see Household [Internet] User Habits survey on the Falkland Islands as an element of Communications Week in March 2019. However, the stated objective of the survey made me stop and think. 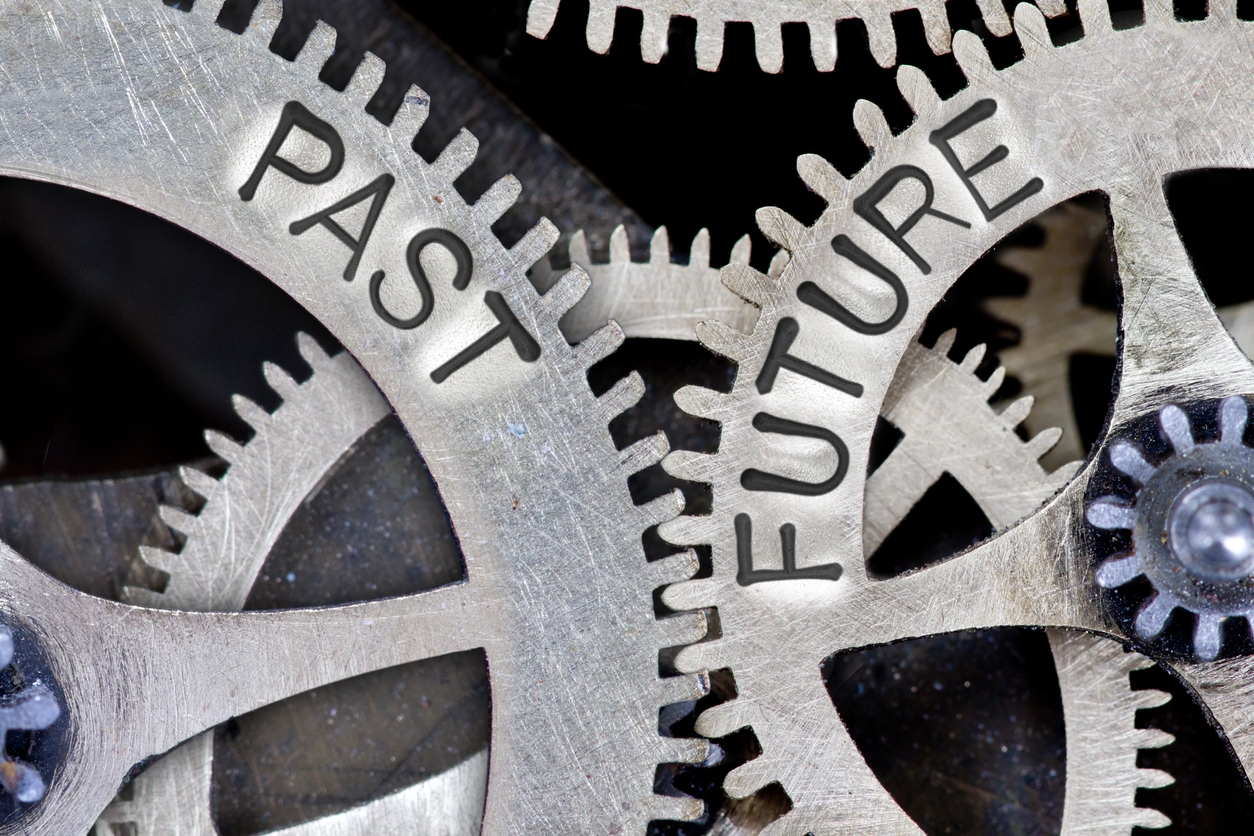 “The results of this survey will contribute to calculating the international connectivity demands of the Falkland Islands providing a clearer picture of what a ‘typical household’ requires.”

This was further clarified in the “Next Steps” posting on the 10th April 2019:

“A national broadband strategy cannot be about supply-side issues alone and the rollout of infrastructure and networks. It needs to consider demand-side issues…”

At the Communications Week public meeting, several questions were asked from the audience about the Household User Habits survey:

In this post I’d like to consider the challenge of forecasting what the Falkland Islands needs by way of increasing satellite capacity and talk about a number of thoughts that are floating around in my head based on questions asked at the Communications Week public meeting.

Supposition #1: – Horse before the cart?

As a starting point, a key concept I’d like to get across is that the forever-increasing internet network bandwidth or capacity in the rest of the world is purely a derivative factor resulting from rapacious consumer and business demand. Consumers and businesses are in the driving seat.

ISPs will generally only increase their network capacities as a result of their customers’ ever-increasing use of Internet services and applications. Unless ISPs keep up with customers’ IP traffic demands in this ‘tread-mill business’ they will lose customers and revenue with predictable results in a competitive market. In a monopolistic environment this motivation is absent but it should be replaced with other motivators.

Network capacity increases follows Internet usage, not the other way around.

In the Falkland Islands it has been the other way round. Internet users use what they are given and are ‘punished’ if they use more. As I’ve often said in these posts, this is an acceptable practice to prevent congestion on the satellite link and to enable a ‘fair usage’ policy of a limited resource.

However, this really needs to be turned on its head going forward with the cart being placed before the horse for a change but to what degree is the key question?

Supposition #2: Users and protocols can never get enough.

Users and protocols are bandwidth greedy and there is absolutely nothing wrong with that! One of the responses made to a question at the Communications Week public meeting was (paraphrasing): “Yes we could spend more on significantly increasing satellite capacity but would it be used?”

I find this on-the-spot response rather challenging and flies in the face of Internet reality. I guess this is for two reasons:

Of course, if there are no bandwidth limitations then every member of a household could and do watch different movies simultaneously. That’s just how it is. 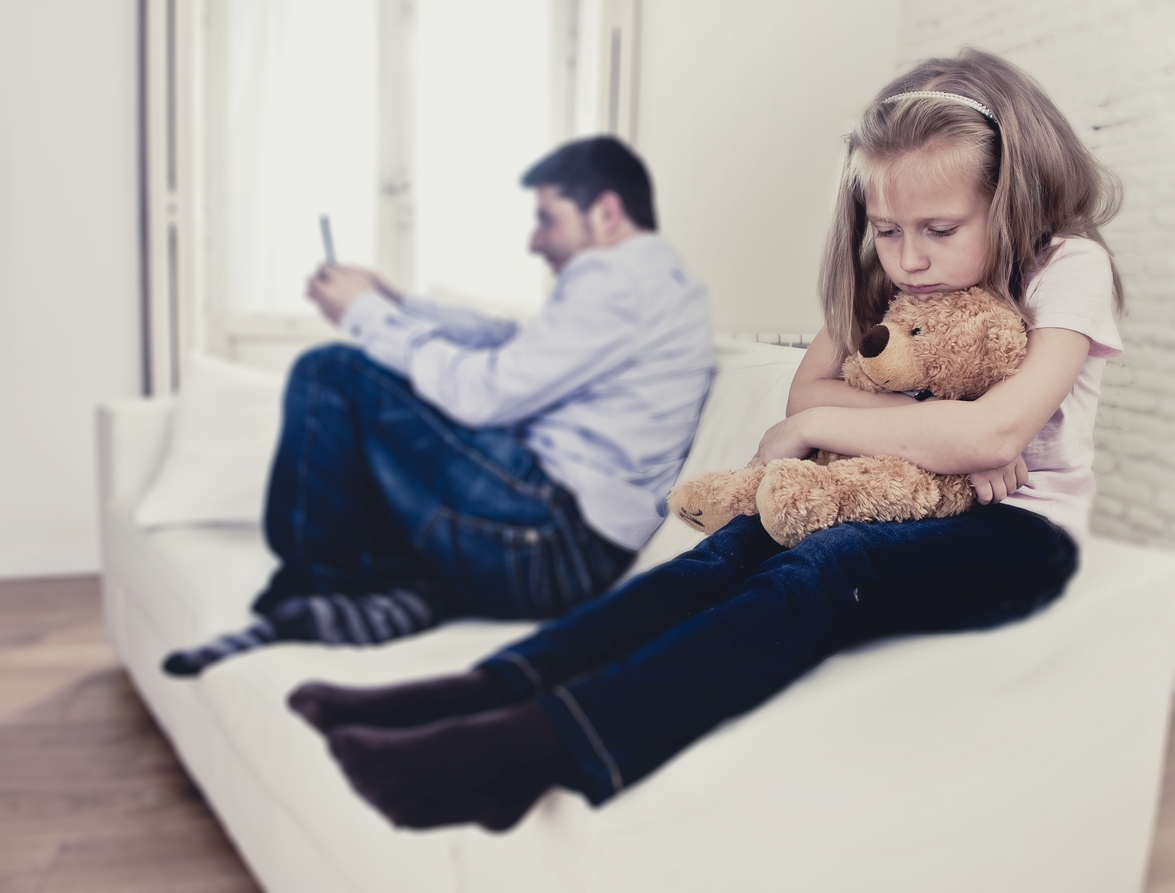 Today, in the Falkland Islands it would only take 42 individuals watching Netflix to congest the satellite at the expense of the other 1750 users!

TCP/IP also uses a congestion window which indicates the maximum amount of data that can be sent out on a connection without being acknowledged. TCP detects congestion when it fails to receive an acknowledgement for a packet within the estimated timeout and slows down.

The nature of Internet Protocol (IP) and its users means that basing future forecasts on current application use does not lead to a reliable method of forecasting future capacity needs for the Falkland Islands. In fact it is a complete red herring.

A number of the questions asked at the Communications Week public meeting focussed on whether any Falkland Islands’ Internet users could sensibly answer the questions asked in the survey. This is because Falkland Islanders’ Internet usage is currently so constrained that it would be very difficult for them to imagine what they could do if there were no imposed or self-imposed constraints. 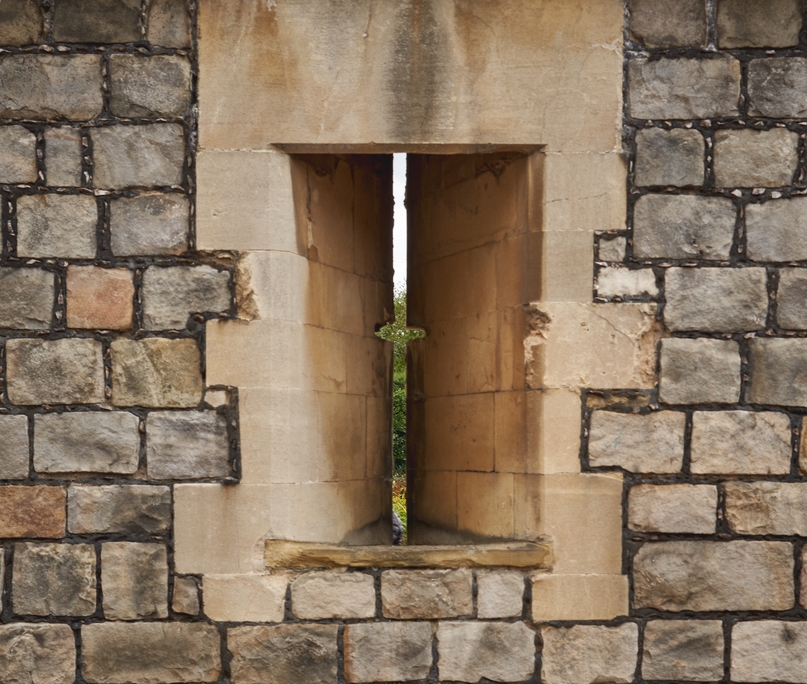 A good analogy would be after looking through a narrow slit for all your life, how could you ever imagine what you could do in a world whose limits have only occasionally been seen or experienced?

I would concur with this view. Without the straight jacket of the 210Mbit/s satellite link, Falkland Islanders’ use of the Internet would be absolutely no different to any individual in Western Europe whose usage profile can be seen in in Falkland Islands’ Internet usage: Part 2, What’s going on in the rest of the world.

Running a survey is often a positive activity, but finding out how much Falkland Islands’ consumers and businesses have modified their use of the Internet due to the constraints of limited satellite capacity brings little benefit to my mind.

The total number of users is certainly key metric and the usage profile for an unconstrained Falkland Islands Internet user would be no different to that of someone living in Western Europe if such access was available to them.

Such a bandwidth cannot be considered to be economically feasible so an alternative or ameliorative solution must be found i.e. locally delivered Internet services.

When considering ‘capacity upgrade planning’, most telecommunications companies located in unconstrained Internet countries, rely a great deal on projecting forward historical traffic. So it would be tempting to use the same strategy in the Falkland Islands. 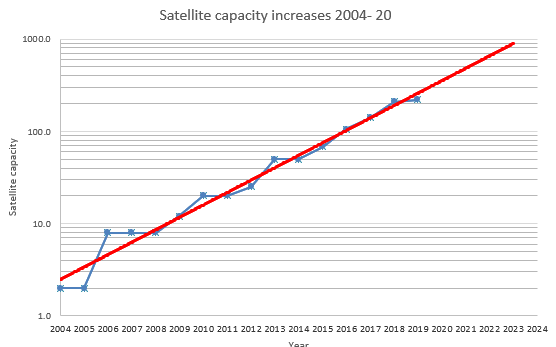 Historical satellite capacity increases on the
Falkland islands plotted on an exponential axis.

History would predict that the satellite capacity should increase to 1Gbit/s by 2023 (ignoring the 2019 anomaly of increasing bandwidth by only 5%). If it were just a matter of consumers limiting their Internet usage to simple applications such as Facebook or emailing then the Quality of Experience (QoE) of using the Internet would certainly improve. However, this would not dramatically change what services Falkland Islands’ Internet could use.

At evening busy hours, maybe 25% of users would want to watch a HD movie which would require 2.25Gbit/s of satellite capacity even if Netflix or Amazon Prime could offer services in the Falkland Islands – which they don’t.

Even if the satellite capacity increased to 1Gbit/s it would still not support many of the streaming services Falkland Islands’ Internet users are missing out on.

Supposition #6: Would customers use extra capacity?

An on-the-spot answer to one of the questions asked at the Communications Week public meeting was (paraphrasing) “Yes, there are satellites solutions available but they are expensive. If we spent that money would Internet users actually use it?”

There really, really, is no need to ask that question in relation to Internet services.

Of course, the answer is yes. How could it be any other? There is no maximum or optimum satellite capacity that would be enough for the Falkland Islands. Every Mbit/s available would be used. That is the nature of the Internet much to the frustration of the telecommunication companies that have to pay for it.

Anyway, even if users did not use it then protocols like TCP/IP most certainly would!

Supposition #7: “Would customers pay more” or “Can the islands (afford) not to afford it?”

An on-the-spot answer to one of the questions asked at the Communications Week public meeting was (paraphrasing) “Yes, there are satellites solutions available but they are expensive. Would customers be prepared to spend more?”

It cannot be denied that this is a very sensible and understandable question for a telecommunications business to ask as it lies at the heart of a commercial business..

The importance of the Internet to the Falkland Islands cannot be underestimated. It lies at the very heart of virtually every aspect of life in 2019. A few maybe uncomfortable with this but I’m afraid it is a trend that is irreversible and will only increase in coming years.

The quote from Jan Ziskasen, CEO of Faroese Telecom – “We have done what we have done not because it makes business sense but because it is the right thing to do” should be a mantra on the Falkland Islands too.

The answer to the question depends on how it the additional cost is paid for:

I believe before any satellite capacity planning can even be contemplated, the development of a local Internet must be agreed beforehand, to be able to answer the unstated question “What global Internet services can we continue to withhold from Falkland Islands’ Internet users?”

I would be tempted to guess that building the local high-speed network could almost be paid for by the reduced spend on satellite capacity. This would probably require IT skills than telecommunication skills to build in practice.

The Falkland Islands are now at a point of real inflection in regard to Internet usage. Which path is chosen is critical. 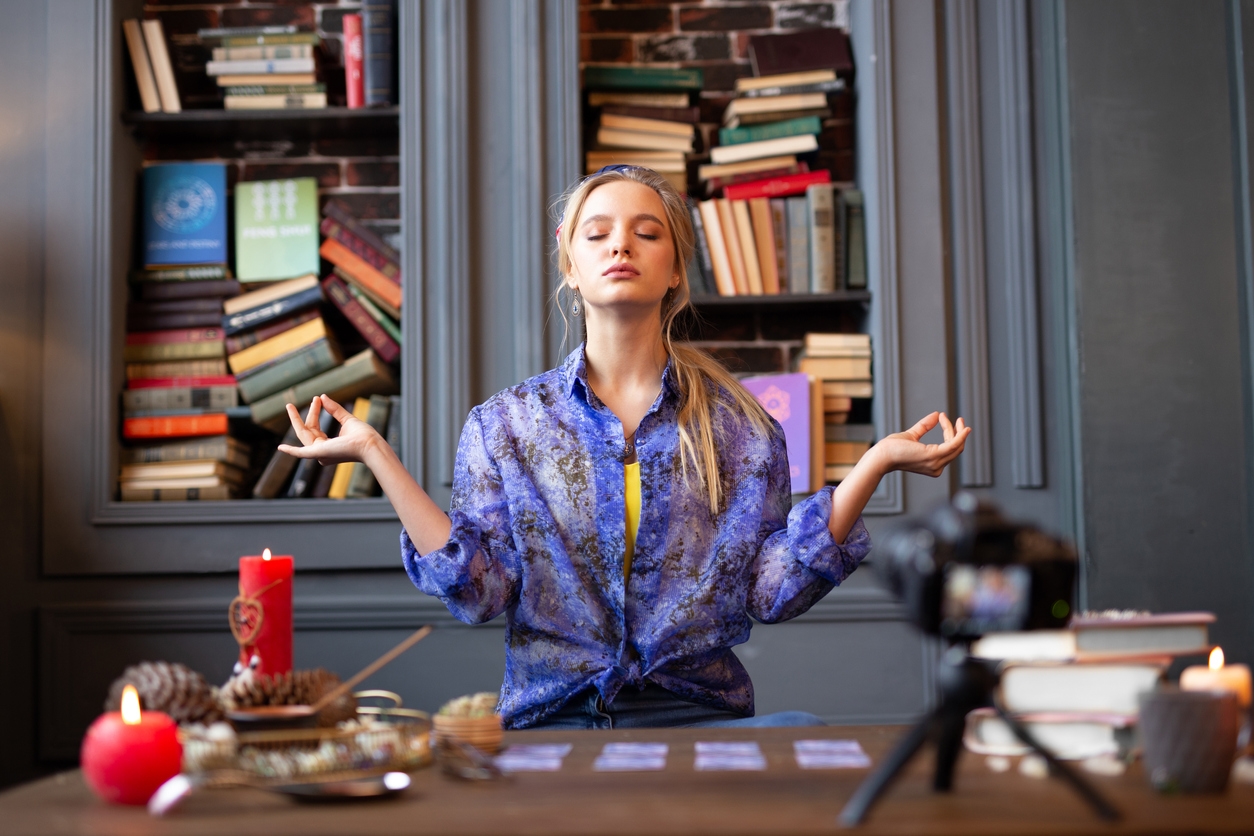 In my opinion, future satellite capacity should not be determined exclusively by what is seen as an acceptable business case to the Sure ‘head office’, rather it should be determined by a number of issues discussed in this post being resolved – many of which require government involvement and solutions.

I hope it is primarily driven by the realisation that the Internet is a key utility sitting alongside electricity and water utilities in importance. Yes, maybe even more important as the islands involvement and interaction with the outside world totally depends on it.

Justifying significantly increasing Falkland Islands satellite capacity is not really either “demand” or “supply” based; it’s a politically driven decision as it is so important to the Falkland Islands’ future.

The unstated question that is being asked in the Household User Habits survey is “What global Internet services can we continue to withhold from Falkland Islands’ Internet users?”

The answer to this are none. Increasing satellite capacity alone is not the answer. Without a strong local Internet to deliver the Internet services that cannot be delivered over a satellite link, then that is the only question that remains to be asked.

I hope that most Falkland Islands’ consumers, businesses, government and MLAs would not be able to disagree or argue against this view.